"Tarmak may well be the best transitioning mechanism not only in the Colemak universe, but in layouts period."
~ Lalop

I've added four Tarmak layouts that provide stepping stones from the standard QWERTY layout to Colemak[eD] by moving only 3-4 keys per step. Each step brings at least one important key to the home row (notably, E-T-R-O-I) and only the rare J key is misplaced in the process. If you're brave and impatient, you may of course skip steps to customize your progress.

The Colemak optimized layout changes 17 keys from QWERTY. This is far less drastic than the well-known Dvorak layout with up to 33 changed keys but no benefit over Colemak (although that's hard to prove either way!). Some people feel that it's okay to change everything and that knowing each layout is like knowing a separate language, but at the same time it's a lot more work for an English speaker to learn Japanese than, say, German!

But even 17 key positions aren't learnt in a jiffy and not everyone has the time or stamina to make a switch that may hit your work efficiency for weeks. Therefore, some have made more minimalistic layout changes such as the Minimak layouts that let you change only 4, 8 or 12 keys and still gain decent benefits. But those don't have the effectiveness of a properly optimized layout like Colemak so it's still a tough choice for the weary traveller.

What if you could change only 4, 7, 10 or 14 keys, each step a progression from the former, gain incrementally better key positions as you go and end up with the typing power of a fully operational Colemak? Using the Tarmak layouts, you can! Please read on, and I'll show you how. 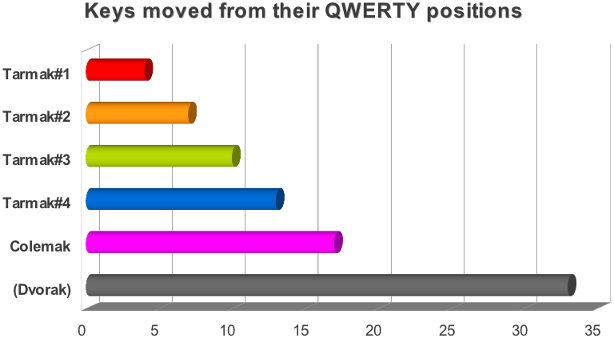 READ ON ABOUT THE TARMAK STEPS...

There have been several positive reports from satisfied Tarmak users.

The very first Tarmak user was Ezuk. Working as a writer, he gave up going cold turkey because he needed his fingers with him at all times. He used the 3-step 2008 version of Tarmak over a period of several months to ensure full typing fluency and wrote a very positive blog review that got some attention. More recently he's written an excellent promotion post for the updated Tarmak with notes on using PortableKeyboardLayout to learn and use the layouts. Highly recommended reading!

It’s Free, Easy To Use, And Won’t Kill Your Productivity

Here is why Tarmak is the best way to learn a superior keyboard layout:

The transitional layouts worked really well for me because of the following:

Forum user Coldmak had a smooth 9-day transition to Colemak...

...as shown in the graph below from the Amphetype program. He obviously worked quite hard for it as shown by the many test points on the graph, but kept his typing speed above 20 words per minute (although he probably rushed the last step a little) and reported a pleasant experience. After that transition, his Colemak typing speed kept rising as you can see in his topic.

My approach has been to stick with a stage until I exceed 30 wpm then move to the next [each stage took about 3 days]. Predominantly I have just forced myself to use tarmak at work for everything (mainly emacs) but with a bit of typeracer thrown in for fun
[...]
I think these stages are a really good way of breaking down a very tough task,
there is no way i could do this cold turkey direct to colemak
[...]
So all in, I think going qwerty to colemak via tarmak will take half the effort as learning to touch type qwerty from scratch

Another recent one from RavenLoon:

I started my Tarmak project [...] with a plan to step up each Friday after work. I made the final transition [in a month]. It's been just over a week and I've timed out in Amphetype twice at over 50 wpm / 97% accuracy, though my average is still only in the 40's. Each week I was able to fairly easily climb back from the instant "hit" to reliably over 40 wpm / 97% accuracy before the next step.

I typed on Qwerty for over 30 years. DreymaR's Tarmak method finally gave me the gradual methodology I needed to move to a better keyboard layout [...] and (for me the final piece of the puzzle) the Tarmak transition method puts [Colemak] truly within reach of people who actually have to keep getting work done while working on the transition.

A nice writeup on Medium by Vojta Jina:

Here is the best part, are you ready? Some genius figured out that you can make a smooth transition from QWERTY to Colemak in five small steps! Each step is just swapping a couple of keys and thus you don’t have to be useless.

Another reassuring message from colemux:

The time spent on Tarmak was an insignificant slice of the total time to get here, and I've not made any "Tarmak mistakes" since shortly after switching away from Tarmak 4. So it's clear that for me, using Tarmak couldn't possibly have slowed down my learning to any significant degree at all. But as a means of maintaining motivation in the early days, I found it very useful, and I think it made the difference between carrying on and giving up (as I did the first time I tried, sans Tarmak).

Having a day job that needs a lot of typing meant I couldn’t have switched cold-turkey. Tarmak made it possible because in the worst case I’d just “let it go” and make more typos, still having some decent speed. In a week per stage I was on full colemak.

Q: What about that J key jumping all over the place – won't that be both confusticating and bebothering?
A: Don't worry! As seen in the 'Tarmak analysis' section, J is the rarest key not moved from its QWERTY position. As such, it won't get too ingrained during the transitions. You'll be more preoccupied with the frequently used keys that move to better places, and those will be learnt faster.

Q: I'm put off by doing so many steps to get there!?
A: Feel free to skip one or more steps. The transition can be made to suit your preferences. I think Tarmak2(ET) is really good in terms of gain, and it moves a few keys on each hand if you want to train both hands at the same time. That's probably where I'd start if I were feeling impatient and bold. After that, one possibility would be to do the important but tricky RSD loop before moving to full Colemak.

Q: When should I switch to the next step?
A: When you feel ready and up to it! It has been suggested that you should aim for about 97% accuracy at 40 WPM before you move on to the next step. That sounds about right to me, but to each their own. You definitely shouldn't rush it but then again you may not want to get too cozy with each temporary step either. Finally, if you need to be fully productive right now you can take the next step later when you have more time. It would probably make more sense to advance on Friday night than in the middle of your workweek, for example.

Q: Argh! R and S are so annoying! How could Shai do this to me?
A: Many Colemak learners struggle at first with S changing fingers and R skipping over it; it's extra noticeable since Colemak has few keys changing fingers from QWERTY. The predecessors of Colemak had S in its QWERTY place but making a good enough layout that way didn't prove possible so in the end S had to move. Consider that FS/SF and SC/CS are much less common bigrams than FR/RF and RC/CR, and typing same-finger bigrams fast is tiresome. Tarmak step 3 moves only R S D, and so at least you get to learn the new S placement without too much else to think of at the same time.

Q: What on earth is Tarmak(ETROI) versus Tarmak(ETOIR) versus Tarmak(#@¡€%)?
A: There have been a couple of earlier layers of Tarmak. ETOIR is the previous Tarmak progression from 2011, and ETROI the new one from 2014. They're named after which important letter each step brings to the Colemak home row; see the 'naming and history' section below if you're interested. If not, nevermind! :-)

Q: Can I learn the L>U>I loop earlier? It's so cute and I want to do it as a warm-up for things to come.
A: The first "Tarmac" layouts had the LUI loop as the first step, but that didn't give enough benefit for the effort and led to some nasty same-finger bigrams (when you have to use the same finger for two consecutive strokes – I hate that). You may move the LUI loop if you wish; ask me for how to do this if you're interested. It's small and quite easy to learn – but on the other hand you may want to finish the big loop as soon as possible. But beware that if you do the LUI loop before the O is in place you may incur bad OI/IO bigrams.

For additional info, such as Tarmak analysis and history, check out the Tarmak Analysis & History Forum post.

I'd like to say thanks to all the wonderful people of the Colemak forums and elsewhere who have contributed in various ways, with testing, analysis and/or discussions. Many of them are mentioned above, but if anyone is left out it's an oversight and nothing else. In particular, I have to mention Ezuk, Cevgar, Karl and Lalop who made such valuable contributions all bringing this idea forwards. Also, thanks (again!) to Shai Coleman for making Colemak in the first place!