MessagEase is a wonderful touch screen keyboard with large keys, very fast typing and lots(!) of possibilities! For touch screen devices I believe a tap-and-swipe design is superior to the traditional tap-only approach, especially since tapping your fingers repeatedly on a hard surface can be tiring. With the 3×3 large keys of MessagEase you can type fast quite comfortably; I use dual thumbs and have achieved ≈60 WPM without any auto-correction. In the Colemakoid MessagEase layout topic you can read more about this wonderful touch screen "keyboard" and my preferred settings for it. Highly recommended for your screen devices!

To install the Colemakoid MessagEase Keyboard: Copy the code below. Paste it on the code area in MessagEase's Settings > Keyboard Exchange, then tap the Arrow-to-keyboard button to affect your keyboard.

Or, bring up MessagEase keyboard when the code below is showing on your device's screen and is editable. Then tap AND HOLD on the hand button. MessagEase will then read the code and offer you to save or load it.

The MessagEase keyboard app is available as a free download from Google Play for Android devices, or the App Store for iPhone/iPad 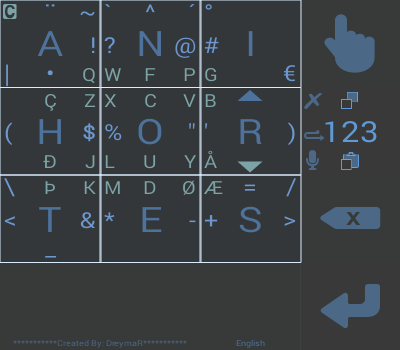 The Typing of the Dead

The Typing of the Dead is a weird and wonderful thing: The rail shooter House of the Dead converted into a typing game! Heh. So much fun.

The conversion is quite faithful, but with extra silly elements added – particularly in the first game. Zombies will often throw or wield kitchen utensils instead of knives and axes, and the main characters have a SEGA Dreamcast console with a huge cell battery strapped on their back as well as a SEGA keyboard before them.

The original is still lying about and considered abandonware, so if you're interested you may give it a spin of the barrel. The original's drills can be downright handy for practising a particular aspect of your typing. There are exercises focused on typing speed, accuracy, reaction and special keys. There's even a typing tutorial (QWERTY-based but still useful). 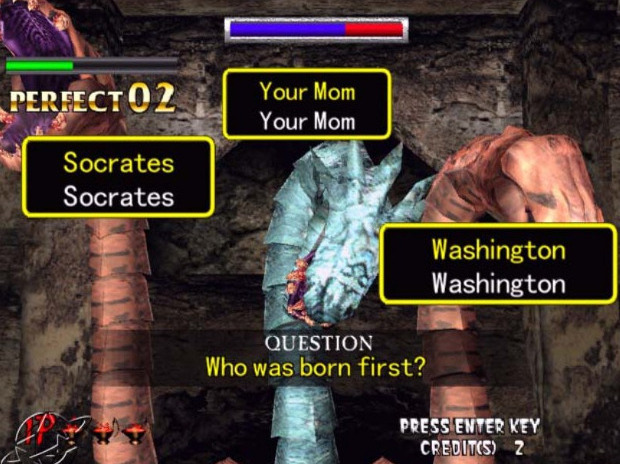 In The Typing of the Dead, you'll meet various challenges such as the Tower boss. Type in the right answer to defeat it.

The second installment, Typing of the Dead: Overkill is available on Steam, optionally bundled with several add-on dictionaries. It has more shine, but only three extra minigame modes. And I have a feeling that it's managed the nigh-impossible task of being even cheesier than the original. Beware! ;-) 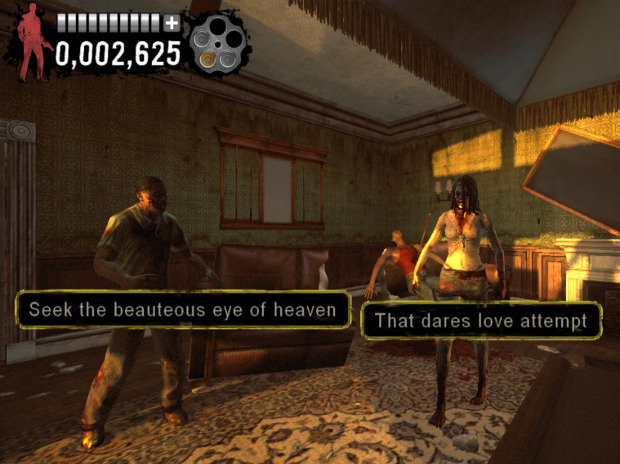 The Typing of the Dead: Overkill has hi-res sound & graphics, and custom dictionaries such as this Shakespeare one!

For the record: I like both! The original is what I'll go to for typing training, though.

More info and downloads through these links:

Technical tips for Typing of the Dead:

Epistory – Typing Chronicles is an excellent typing game if you like soft fantasy, and it's set in a beautiful origami world. It also has a similarly polished successor named Nanotale and the two are found together in the Typing Journey bundle if you want both of them at once. The discount is around 20% so it isn't a huge deal either way. So far I've played through Epistory and liked it so much I bought the successor as well. 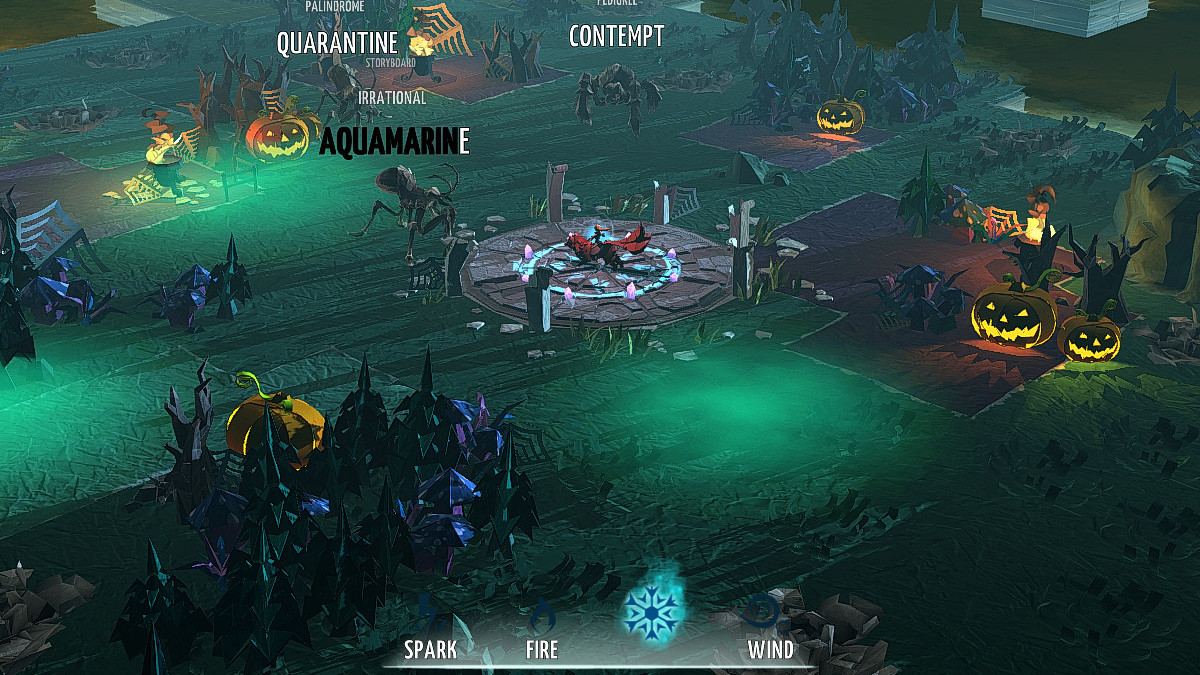 Epistory has moody and interesting scenery like the Forest,
and some long words to type here and there!

Epistory has you typing words to unlock its beautiful world while riding a three-tailed fox. The world literally unfolds as if it were made out of painted origami, which is a really nice touch. There are also creepy-crawlies to defend yourself against, some found in the wild and many more gathered in nests that you need to conquer; this is where the typing can get intense! In both cases you simply type the words that show up. Sometimes it's a single word or letter, and sometimes there are several words to type for each obstacle or beastie. 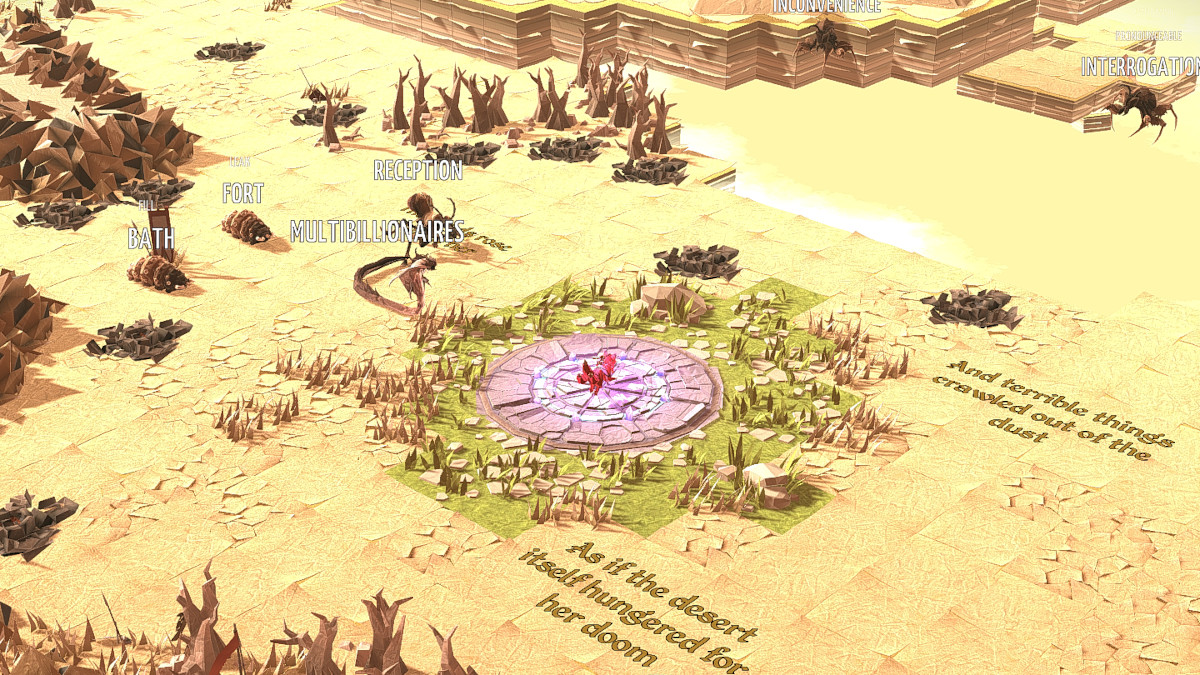 The story literally unfolds as you type, with moods and sights aplenty
... if you can survive this guy to see the next one ...

A quirky and fun game mechanic is the four different types of magic you can use. If you type 'ice' your words will freeze monsters to buy you time. Fire magic burns away the next word of the monster, which can be a huge help when there are lots of two-word monsters approaching! There's also wind and spark magic, which I'll let you discover for yourself. Some monsters and obstacles require a specific type of magic. 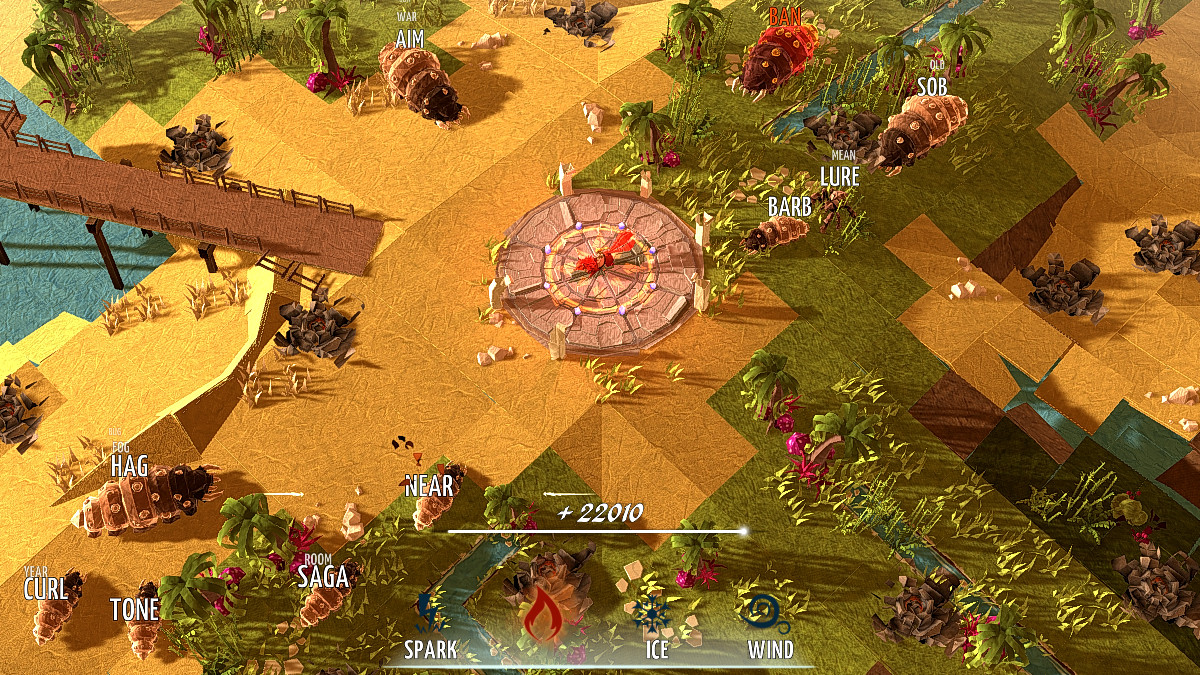 A busy moment on the Island gets the combo meter going.
Note the fire-only monster at the top.

All menu options can be typed and movement is with keys so you don't have to mouse at all while playing, which is pleasant. If you're overwhelmed at any point, you won't lose lives but respawn without any punishment to try again. As an around 80 WPM typist, I mastered the top difficulty (Insane) so on my second run-through I set that instead of using the adaptive difficulty setting. Both gave about the same result, I think. There's also an Arena mode that works as a typing test with a game twist. 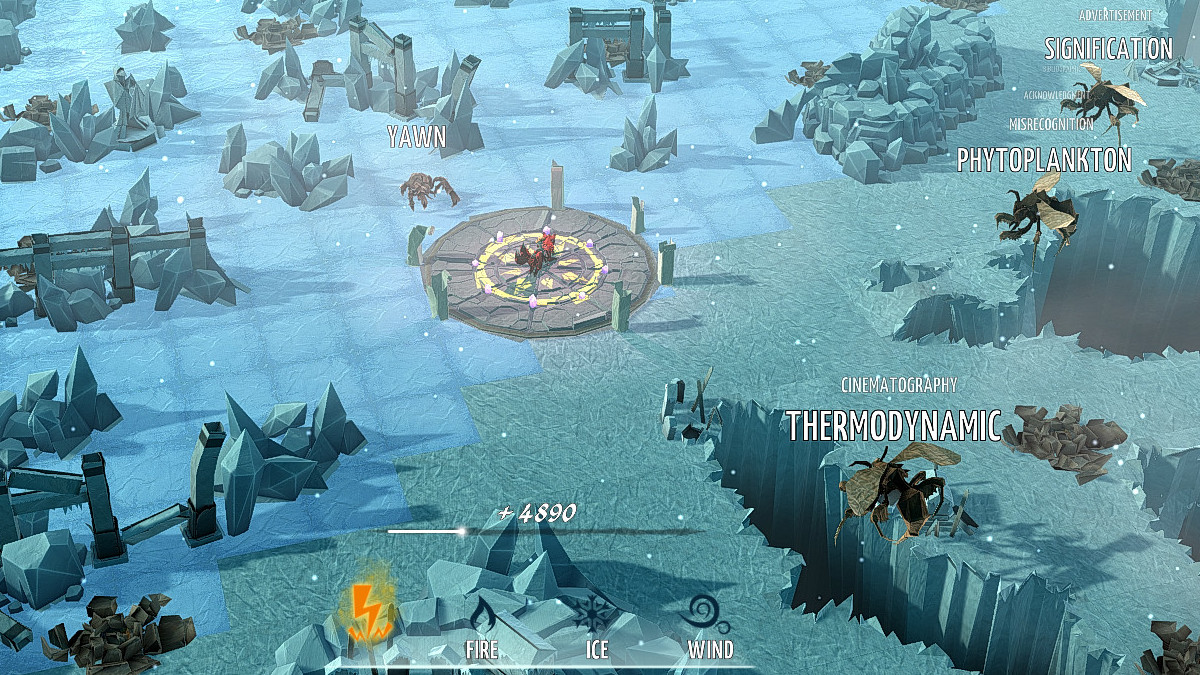 There are several other

Typer Shark Deluxe is a fun game I used to play a lot. You type increasingly difficult words to zap sharks that are out to get you.

CAPSLOCKDAY is a Steam bundle for those who want to try out what's around. It's a bunch of more or less typing related games at a somewhat friendlier price, but if you aren't interested in all you might as well buy just the ones you want. I'm trying them out these days, and I'm having fun with most of them.

My impressions of the Capslockday bundle:

I've described and linked to some more game-like training methods on the BigBag Training page. One such training-gaming tool is the Fast Typer games that are playable online. they play like unforgiving word typing tests with timers; you need a high accuracy to keep the timer back.

USB-to-USB remapping devices are programmable microcontrollers that allow you to remap and enhance your keyboard. I've decided to call this kind of device a QUICKIE (QWERTY USB In, Colemak Key Input Emulated)! ￣(=⌒ᆺ⌒=)￣

It's a very interesting XKB/Win/Mac-independent trick: A USB-to-USB device that plugs between the keyboard and whatever you're connecting your keyboard to, provides an OS independent solution that can accommodate many of my tricks! For people having to deal with zealous IT security rules, this may be the only solution short of getting an expensive remappable keyboard. It could let you type Colemak to, say, a PlayStation. And it could be fun to make one yourself if you're adventurous and DIY oriented! If you do have an actual programmable keyboard, you can probably use nearly the same (TMK) code for it.

The safest and easiest option may be to order the brilliant USB to USB Converter from GeekHack user Hasu, who has also developed the TMK software for converting keyboards to more awesome keyboards. I provide TMK files in the USB-2-USB Big Bag topic.

For more info, see the Big Bag of Tricks topic – USB2USB edition! Note that some keyboard controllers can be programmed with TMK or its fork QMK. My code should work for these controllers too, at least using TMK, and then you wouldn't need a separate device.

You don't need special hardware to use a special layout. On my laptop I blind type happily away using Colemak-CAW and the only change I've made is to scratch the N (QWERTY K) key a little to aid homing since I have a Wide ergo mod. But some will want the visual to match the experience. And naturally, many layout enthusiasts are also keyboard hardware enthusiasts!

These days, there are many many options to buy or make a keyboard to your liking. I have an old and somewhat dated physical board modding topic where you may pick up some ideas, but you may also want to search around for newer topics.

I also suggest checking out the Deskthority.net Wiki and the GeekHack.org forums as they are great founts of knowledge and opinions on most things keyboard. Especially mechanical switches, but lots of other things too. For all questions hardware, there's also the Colemak Discord #Hardware channel, always full of knowledgeable and helpful enthusiasts.

You may or may not feel the need for Colemak-related images, but I do. In my Image topic you can see a showcase of them. Some are useful as help images, others are interesting and some are hopefully funny.